One port bonus tile, one scoring tile and one clan tile were added to the first edition of Clans of Caledonia during the Kickstarter campaign. They were suggested by the Kickstarter backers and they voted among their suggestions.

Each time you fulfill an Export contract which gives you Hops, you can immediately produce 1 Beer for each unit of Hops imported at the cost of 1 Grain each. For each unit of Beer produced, you receive £9. After more playtesting we found the preliminarly value of £9 to be balanced.

You can produce max. 3 beer per contract. Thus, you can gain at maximum £27 from your clan ability per Export contract. You can choose to brew beer before or after taking any Direct export bonuses. 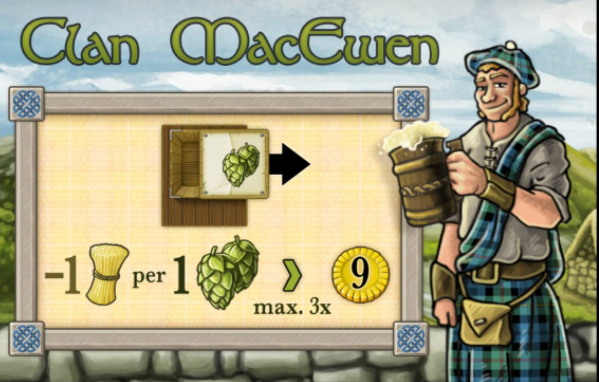 We apply cookies to secure an optimal use. With the further use of this website you accept the application of cookiesOk